Irritable bowel syndrome is a functional gastrointestinal (GI) disorder, meaning symptoms are caused by changes in how the GI tract works. People with a functional GI disorder have frequent symptoms; however, the GI tract does not become damaged. IBS is a group of symptoms that occur together, not a disease. In the past, IBS was called colitis, mucous colitis, spastic colon, nervous colon, and spastic bowel. The name was changed to reflect the understanding that the disorder has both physical and mental causes and is not a product of a person’s imagination.

IBS is diagnosed when a person has had abdominal pain or discomfort at least three times a month for the last 3 months without other disease or injury that could explain the pain. The pain or discomfort of IBS may occur with a change in stool frequency or consistency or be relieved by a bowel movement.

IBS is often classified into four subtypes based on a person’s usual stool consistency. These subtypes are important because they affect the types of treatment that are most likely to improve the person’s symptoms. The four subtypes of IBS are

What is the GI tract? 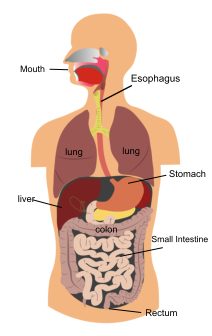 The organs of the GI tract

The GI tract is a series of hollow organs joined in a long, twisting tube from the mouth to the anus—the opening through which stool leaves the body. Food is digested by the movement of muscles in the GI tract, along with the release of hormones and enzymes. Organs that make up the GI tract are the mouth, esophagus, stomach, small intestine, large intestine—which includes the appendix, cecum, colon, and rectum—and anus. The intestines are sometimes called the bowel. The last part of the GI tract—called the lower GI tract—consists of the large intestine and anus.

The large intestine absorbs water and any remaining nutrients from partially digested food passed from the small intestine. The large intestine then changes waste from liquid to a solid matter called stool. Stool passes from the colon to the rectum. The rectum is located between the last part of the colon—called the sigmoid colon—and the anus. The rectum stores stool prior to a bowel movement. During a bowel movement, stool moves from the rectum to the anus.

What are the symptoms of IBS?

The most common symptoms of IBS are abdominal pain or discomfort, often reported as cramping, along with changes in bowel habits. To meet the definition of IBS, the pain or discomfort will be associated with at least two of the following three symptoms:

Other symptoms of IBS may include

The causes of IBS are not well understood. Researchers believe a combination of physical and mental health problems can lead to IBS.

Signals between the brain and nerves of the small and large intestines, also called the gut, control how the intestines work. Problems with brain-gut signals may cause IBS symptoms, such as changes in bowel habits and pain or discomfort.

Normal motility, or movement, may not be present in the colon of a person who has IBS. Slow motility can lead to constipation and fast motility can lead to diarrhea. Spasms, or sudden, strong muscle contractions that come and go, can cause abdominal pain. Some people with IBS also experience hyperreactivity—a dramatic increase in bowel contractions in response to stress or eating.

People with IBS have a lower pain threshold for bowel stretching caused by gas or stool compared with people who do not have IBS. The brain may process pain signals from the bowel differently in people with IBS.

Mental health, or psychological, problems such as panic disorder, anxiety, depression, and post-traumatic stress disorder are common in people with IBS. The link between these disorders and development of IBS is unclear. GI disorders, including IBS, are often found in people who have reported past physical or sexual abuse. Researchers believe people who have been abused tend to express psychological stress through physical symptoms.

Some people who have bacterial gastroenteritis—an infection or irritation of the stomach and intestines caused by bacteria—develop IBS. Researchers do not know why gastroenteritis leads to IBS in some people and not others, though abnormalities of the GI tract lining and psychological problems may be factors.

People with IBS have altered levels of neurotransmitters—chemicals in the body that transmit nerve signals—and GI hormones, though the role these chemicals play in developing IBS is unclear. Younger women with IBS often have more symptoms during their menstrual periods. Post-menopausal women have fewer symptoms compared with women who are still menstruating. These findings suggest that reproductive hormones can worsen IBS problems.

Whether IBS has a genetic cause, meaning it runs in families, is unclear. Studies have shown IBS is more common in people with family members who have a history of GI problems. However, the cause could be environmental or the result of heightened awareness of GI symptoms.

Many people with IBS report that symptoms are triggered by foods rich in carbohydrates, spicy or fatty foods, coffee, and alcohol. However, people with food sensitivity typically do not have clinical signs of food allergy. Researchers have proposed that symptoms may result from poor absorption of sugars or bile acids, which help break down fats and get rid of wastes in the body.

How is IBS treated?

Though IBS does not have a cure, the symptoms can be treated with a combination of

Large meals can cause cramping and diarrhea, so eating smaller meals more often, or eating smaller portions, may help IBS symptoms. Eating meals that are low in fat and high in carbohydrates, such as pasta, rice, whole-grain breads and cereals, fruits, and vegetables, may help.

Certain foods and drinks may cause IBS symptoms in some people, such as

People with IBS may want to limit or avoid these foods. Keeping a food diary is a good way to track which foods cause symptoms so they can be excluded from or reduced in the diet.

Dietary fiber may improve constipation symptoms in people with IBS, although it may not help with reducing pain. Fiber softens stool so it moves smoothly through the colon. Adults are advised to consume 21 to 38 grams of fiber a day.3 Fiber may cause gas and trigger symptoms in some people with IBS. Increasing fiber intake slowly, by 2 to 3 grams a day, may help reduce the risk of increased gas and bloating.

A health care provider will select medications based on a person’s symptoms.

The antibiotic rifaximin can reduce abdominal bloating by treating small intestinal bacterial overgrowth; however, scientists are still debating the use of antibiotics to treat IBS and more research is needed.

Probiotics are live microorganisms, usually bacteria, that are similar to microorganisms normally found in the GI tract. Studies have found that when taken in large enough amounts, probiotics, specifically Bifidobacteria and certain probiotic combinations, improve symptoms of IBS. However, more research is needed. Probiotics can be found in dietary supplements, such as capsules, tablets, and powders, and in some foods, such as yogurt. A health care provider can give information about the right kind and amount of probiotics to take to improve IBS symptoms. To help ensure coordinated and safe care, people should discuss their use of complementary and alternative medical practices, including their use of dietary supplements and probiotics, with their health care provider. Read more at www.nccam.nih.gov/health/probiotics.

The following therapies can help improve IBS symptoms due to mental health problems:

Symptoms may often occur after eating a meal. To meet the definition of IBS, symptoms must occur at least three times a month.