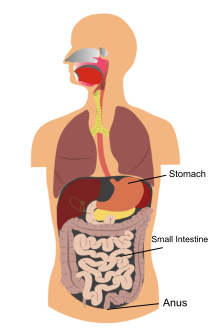 Constipation is a condition in which a person has fewer than three bowel movements a week or has bowel movements with stools that are hard, dry, and small, making them painful or difficult to pass. People may feel bloated or have pain in their abdomen—the area between the chest and hips. Some people think they are constipated if they do not have a bowel movement every day. Bowel movements may occur three times a day or three times a week, depending on the person.

What is the gastrointestinal (GI) tract?

The GI tract is a series of hollow organs joined in a long, twisting tube from the mouth to the anus. The body digests food using the movement of muscles in the GI tract, along with the release of hormones and enzymes. Organs that make up the GI tract are the mouth, esophagus, stomach, small intestine, large intestine—which includes the appendix, cecum, colon, and rectum—and anus. The intestines are sometimes called the bowel. The last part of the GI tract—called the lower GI tract—consists of the large intestine and anus.

The large intestine absorbs water and any remaining nutrients from partially digested food passed from the small intestine. The large intestine then changes waste from liquid to a solid matter called stool. Stool passes from the colon to the rectum. The rectum is located between the last part of the colon—called the sigmoid colon—and the anus. The rectum stores stool prior to a bowel movement. During a bowel movement, stool moves from the rectum to the anus, the opening through which stool leaves the body.

Constipation is caused by stool spending too much time in the colon. The colon absorbs too much water from the stool, making it hard and dry. Hard, dry stool is more difficult for the muscles of the rectum to push out of the body.

Common factors or disorders that lead to constipation are

The most common cause of constipation is a diet with too little fiber. Fiber is a substance in foods that comes from plants. Fiber helps stool stay soft so it moves smoothly through the colon. Liquids such as water and juice help fiber to be more effective.
Older adults commonly do not get enough fiber in their diets. They may lose interest in eating because food does not taste the same as it once did, they do not feel hungry as often, they do not want to cook, or they have problems with chewing or swallowing. These factors may lead an older adult to choose foods that are quick to make or buy, such as fast foods or prepared foods, which are often low in fiber.

Medications that can cause constipation include

Constipation can also be caused by overuse of over-the-counter laxatives. A laxative is medication that loosens stool and increases bowel movements. Although people may feel relief when they use laxatives, they usually must increase the dose over time because the body grows reliant on laxatives to have a bowel movement. Overuse of laxatives can decrease the colon’s natural ability to contract and make constipation worse. Continued overuse of laxatives can damage nerves, muscles, and tissues in the large intestine.

During pregnancy, women may be constipated because of hormonal changes or because the uterus compresses the intestine. Aging can affect bowel regularity, because of a gradual loss of nerves stimulating the muscles in the colon, which results in less intestinal activity. People can also become constipated while traveling, because their normal diet and daily routine are disrupted.

Ignoring the Urge to Have a Bowel Movement

People who ignore the urge to have a bowel movement may eventually stop feeling the need to have one, which can lead to constipation. Some people delay having a bowel movement because they do not want to use toilets outside their home, particularly public restrooms, or they feel they are too busy.

Certain neurological and metabolic disorders can cause food to pass through the digestive system too slowly, leading to constipation. Neurological disorders, such as spinal cord injury and parkinsonism, affect the brain and spine. Parkinsonism is any condition that leads to the types of movement changes seen in Parkinson’s disease. Metabolic disorders, such as diabetes and hypothyroidism, disrupt the process the body uses to get energy from food. Hypothyroidism is a disorder that causes the body to produce too little thyroid hormone, which can cause many of the body’s functions to slow down.

Some problems in the GI tract can compress or narrow the colon and rectum, causing constipation. These problems include

Read more about the Celiac Disease Awareness Campaign at www.celiac.nih.gov.

Functional GI disorders are problems caused by changes in how the GI tract works. People with a functional GI disorder have frequent symptoms; however, the GI tract does not become damaged. Functional constipation often results from problems with muscle activity in the colon or anus that delay stool movement.
Functional constipation is diagnosed in people who have had symptoms for at least 6 months and meet the following criteria for the last 3 months before diagnosis:3

IBS is a functional GI disorder with symptoms that include abdominal pain or discomfort, often reported as cramping, along with diarrhea, constipation, or both. Read more in Irritable Bowel Syndrome at www.digestive.niddk.nih.gov.

How is constipation treated?

Treatment for constipation depends on the cause, severity, and duration of the constipation and may include one or more of the following:

The Academy of Nutrition and Dietetics recommends consuming 20 to 35 grams of fiber a day for adults. Americans consume only 15 grams a day on average.4 People often eat too many refined and processed foods from which the natural fiber has been removed. A health care provider can help plan a diet with the appropriate amount of fiber. A list of high-fiber foods is shown below. People prone to constipation should limit foods that have little or no fiber, such as ice cream, cheese, meat, and processed foods.

Drinking water and other liquids, such as fruit and vegetable juices and clear soups, may make fiber in the diet more effective in normalizing bowel function and maintaining regularity. A health care provider can give advice about how much a person should drink each day based on the person’s health and activity level and where the person lives.

When a medication is causing constipation, the health care provider may suggest the person stop taking the medication or switch to a different medication.

Laxative medications and enemas may be recommended for people who have made diet and lifestyle changes and are still constipated. Laxatives taken by mouth are available in liquid, tablet, powder, and granule forms.

Other types of laxatives include

People who depend on laxatives to have a bowel movement need to talk with their health care provider about how to slowly stop using them. For most people, stopping laxatives restores the colon’s natural ability to contract.

Surgery may be needed to correct an anorectal blockage caused by rectal prolapse. Surgical removal of the colon may be an option for people whose colon muscles do not work properly, causing severe symptoms that do not respond to treatment. However, the benefits of this surgery should be weighed against possible complications, which include abdominal pain and diarrhea.

People with chronic constipation caused by problems with the anorectal muscles can use biofeedback to retrain the muscles. Biofeedback uses special sensors to measure bodily functions. The measurements are displayed on a video screen as line graphs and sounds indicate when the person is using the correct muscles. The health care provider uses the information to help the person modify or change abnormal function. The person practices at home. The person may need to continue practicing for 3 months to get the most benefit from the training.