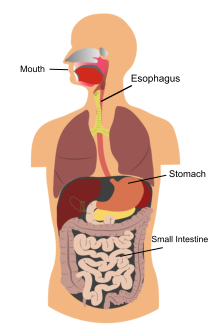 Barrett’s esophagus is a condition in which the tissue lining the esophagus—the muscular tube that carries food and liquids from the mouth to the stomach—is replaced by tissue that is similar to the intestinal lining. This process is called intestinal metaplasia. People with Barrett’s esophagus are at increased risk for a rare type of cancer called esophageal adenocarcinoma.

What is the upper gastrointestinal (GI) tract?

The upper GI tract includes the mouth, esophagus, stomach, and small intestine. The stomach slowly pumps the food and liquids into the intestine, which then absorbs needed nutrients. This process is automatic and people are usually not aware of it, though people sometimes feel their esophagus when they swallow something too large, try to eat too quickly, or drink very hot or cold liquids.

How is Barrett’s esophagus diagnosed?

Barrett’s esophagus is diagnosed with an upper GI endoscopy and biopsy. Upper GI endoscopy involves using an endoscope—a small, flexible tube with a light—to see the upper GI tract. The test is performed at a hospital or outpatient center by a gastroenterologist—a doctor who specializes in digestive diseases. The endoscope is carefully fed down the esophagus and into the stomach and duodenum. A small camera mounted on the endoscope transmits a video image to a monitor, allowing close examination of the intestinal lining. A person may receive a liquid anesthetic that is gargled or sprayed on the back of the throat. An intravenous (IV) needle is placed in a vein in the arm if general anesthesia is given. The test may show changes in the esophageal lining.

The gastroenterologist performs a biopsy with the endoscope by taking a small piece of tissue from the esophageal lining for examination with a microscope. The person will not feel the biopsy. A pathologist—a doctor who specializes in diagnosing diseases—examines the tissue in a lab to determine whether Barrett’s esophagus cells are present. The test results may need to be confirmed by a pathologist who has expertise in diagnosing this condition.

Barrett’s esophagus can be difficult to diagnose because not all tissue in the esophagus is affected. The gastroenterologist takes biopsy samples from at least eight different areas of the esophageal lining, but may not take the samples from the part of the esophagus with cells showing the condition. Barrett’s tissue does not look different from normal tissue when viewed through the endoscope. The difference can only be seen with a microscope. Researchers are working on improved methods for diagnosing Barrett’s esophagus.

How is Barrett’s esophagus treated?

A health care provider will discuss treatment options for Barrett’s esophagus based on the person’s overall health, whether dysplasia is present, and, if so, the severity of the dysplasia. Treatment options include medication, endoscopic ablative therapies, endoscopic mucosal resection, and surgery.

People with Barrett’s esophagus who have GERD are treated with acid-suppressing medications, called proton pump inhibitors. These medications are used to prevent further damage to the esophagus and, in some cases, heal existing damage. Proton pump inhibitors include omeprazole (Prilosec, Zegerid), lansoprazole (Prevacid), pantoprazole (Protonix), rabeprazole (Aciphex), and esomeprazole (Nexium), which are available by prescription. Omeprazole and lansoprazole are also available in over-the-counter strength. Anti-reflux surgery may be considered for people with GERD symptoms who do not respond to medications. However, medications or surgery for GERD and Barrett’s esophagus have not been shown to lower a person’s risk of dysplasia or esophageal adenocarcinoma.

Endoscopic ablative therapies use different techniques to destroy the dysplastic cells in the esophagus. The body should then begin making normal esophageal cells. These procedures are performed by a radiologist—a doctor who specializes in medical imaging—at certain hospitals and outpatient centers. Local anesthesia and a sedative are used. The procedures most often used are photodynamic therapy and radiofrequency ablation.

Endoscopic mucosal resection involves lifting the Barrett’s lining and injecting a solution underneath or applying suction to the lining and then cutting the lining off. The lining is then removed with an endoscope. The procedure is performed by a radiologist at certain hospitals and outpatient centers. Local anesthesia and a sedative are used. If endoscopic mucosal resection is used to treat cancer, an endoscopic ultrasound is done first to make sure the cancer involves only the top layer of esophageal cells. Ultrasound uses a device, called a transducer, that bounces safe, painless sound waves off organs to create an image of their structure.

Complications can include bleeding or tearing of the esophagus. Endoscopic mucosal resection is sometimes used in combination with photodynamic therapy.

Surgery for Barrett’s esophagus is an alternative; however, endoscopic therapies are preferred by many health care providers due to fewer complications following the procedure.

Esophagectomy is surgical removal of the affected sections of the esophagus. After removal, the esophagus is rebuilt from part of the stomach or large intestine. The procedure is performed by a surgeon at a hospital, and general anesthesia is used. The patient stays in the hospital for 7 to 14 days after the surgery to recover. Surgery may not be an option for people with Barrett’s esophagus who have other medical problems. For these people, the less-invasive endoscopic treatments or continued intensive surveillance would be considered.